8:51 AM Posted In Reality TV , Say Yes To The Dress , Television , TLC Edit This 0 Comments »
So, I've mentioned it before but...I watch 'Say Yes To The Dress'. I used to think it was the stupidest show ever, but blast that TLC, they hook me with their programs in a way few other networks can.

Anyway. There are two (technically three) incarnations of SYTTD now. The original, at New York City's Kleinfeld boutique. The spin-off, set at Brides by Lori in Atlanta. And the new spin-off, which is 'Bridesmaids' and also set at Lori's salon down in Hot-lanta as my friends and I have nicknamed it. 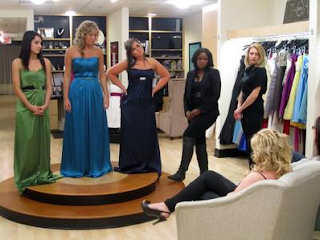 Let's get Bridesmaids out of the way first. It had a short order of episodes to debut this summer - maybe 4 or 5? Generally speaking, I enjoyed it, having been part of the excruciating process of picking out a bridesmaids gown. I think it's something that a larger part of the viewing audience can relate to because there are more bridesmaids than brides. Seriously.

On the flip side, there was less dramatic tension compared to the wedding dress. The budgets of the 'maids was something the brides couldn't be as flexible on as they are with their own dress. And typically only one or two of the bridesmaids, the bride, and maybe one other member of the viewing gallery said anything. But it was fun to see some truly hideous gowns walk out (and in some cases, WIN) - although I wonder if it's bad PR for Lori's salon. Anywho. I wouldn't mind seeing this return to the small screen again. 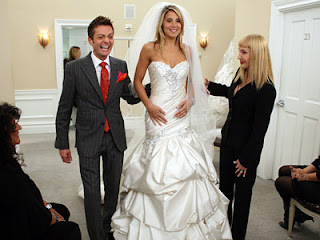 The debate for me comes from which version of SYTTD is better. I'm going to tip my hand say I probably favour the original more, but there are some things I actually like about the Atlanta incarnation. As for the original?

Well, I think they have a better selection of dresses, plain and simple. And if you (plausibly) watch the show for the pretty gowns, then Kleinfeld is your pick. Plus the budgets tend to be higher here, therefore you get to see even more insane gowns tried on. Pnina dresses are always a treat to see, although I'd never wear one myself.

Secondly, I think they have better consultants in terms of being reality show personalities. I feel like I know these ladies and they're all interesting in their own way. And I heart Randy and Nicole, although the latter has been off on Mat leave so last season was a bit weaker. 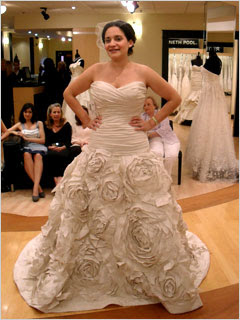 As I said. There are things I like about Atlanta. For one, I feel like Lori and Monty are WAY more candid than anyone on the NY incarnation. Sometimes they can be a little nasty and shrill, but I appreciate their honesty.

For another, the brides tend to be younger (oftentimes moreso than me) so I find I can relate to their fashion sense a lot more than the myriad of brides that parade through Kleinfeld. They also have way more reasonable budgets. This is a bit of a double-edged sword. On the one hand, I like seeing them purchase dresses that are within the realm of possibility for more people. On the other, I like the insane over-the-top extravagance of watching women try on $10,000 or $15,000 dresses. It's like window shopping for me. More often than not, the budget is below $2,000 on Brides by Lori, and the same dresses are often trotted out more than once.

I do appreciate that the alterations department takes up way less time than on the original series - although who knows, the new season could edit down the alterations portion a bit. You literally see one, maybe two sixty-second segments, while on Kleinfeld it can easily eat up five minutes of the show overall. I like seeing the finished product and all, but for me the show is really about buying the dress.

In terms of dislikes, well the consultants aren't nearly as interesting as the NY ones. Robin and Flo are probably the most notable, and while they're all very pretty and sweet and charming, there's no zing like what you get on the original series.

Altogether I'm fully aware the show is totally frivolous. But as a prospective bride-to-be, I've found it very helpful in determining what I do and don't like in a dress in terms of silhouette, details, and PRICE. I'd honestly recommend it for any soon-to-be-engaged gals, and for soon-to-be-shopping-for-a-dress gals. For me it's the equivalent of visiting open houses before you get a real estate agent and shop for a house. It may be silly and overwrought and in some cases, deranged, but in general it's a treat to see dresses on real women to understand what would work best for yourself, instead of flipping through a magazine.