8:11 AM Posted In Fall 2011 , Quarter-Season Report Cards , Television Edit This 0 Comments »
I know. I used to do mid-season report cards, and end of season report cards, but this year I felt the need to comment on the shows I'm watching so far. Just as a point of reference. Because I have some good feelings on some shows, and some bad feelings on others. Anywho. 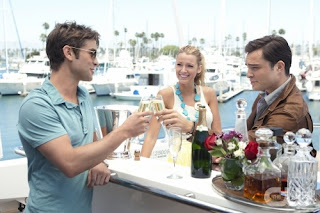 GOSSIP GIRL - I mean, it is what it is. The boyf and I often turn to each other and roll our eyes and laugh at the absurdity of this show. I will say this. I like the ongoing Dan / Blair undercurrent, in fact, I like both characters and their storylines this season. I hope they find a way to keep the handsome Prince in the picture, and I'm enjoying Dan finally having an interesting leading story that is (somewhat) legitimate. Serena, Nate, and Chuck all feel sidelined so far, their stories orbiting around non-essentials. Charlie can disappear anytime now, although I'm enjoying that SOMEONE knows she's Ivy. I hope she's gone by season's end though.
Quarter-Season Grade: B 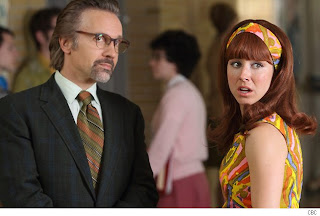 BEING ERICA - Without a doubt, probably one of my most-anticipated shows this year. Typically the only shows I watch on the night they air are results-oriented shows with spoilers, like The Amazing Race and Survivor. But I also try to watch B.E. the night of, just cause I love it so much. However...I'm not disappointed by this season, but the *nature* of this season has Erica taking a backseat to everyone else. While it's fun to get to revisit and learn more about all the secondary characters, I almost miss the lovable screw-up days of Erica circa Season 1. I am still hoping and praying for a season 5!
Quarter-Season Grade: A- 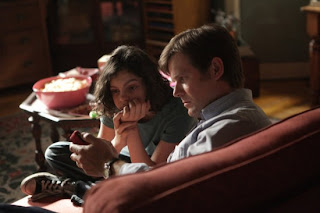 PARENTHOOD - I'm a little behind on this show, admittedly. I tend to let the episodes stack up in 2's or 3's and then watch them all at once. So while I know Kristina has had her baby, and I'm pretty sure Joel and Julia are getting Zoey's baby, I haven't WATCHED those episodes. Regardless, this show is consistently good, if a little on the slow side at times given it's a character drama as opposed to a plot-driven drama. That's not a bad thing. I'm SO happy at the return of Jason Rytter (dreammmmy!) and while I'm sad to see Michael B. Jordan leave, I'm curious to see what happens next for Hattie's character.
Quarter-Season Grade: B+ 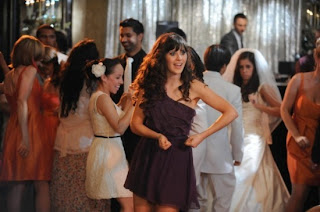 NEW GIRL - Well unfortunately I've only seen three episodes of this season so far, given Fox's commitment to the World Series every year, but from what I've seen, I love this show. I gauge the funniness of a show by the knee-slapping reaction of the bf, and this is by far one of the shows he laughs the hardest at. Looking forward to its return next week.
Quarter-Season Grade: A 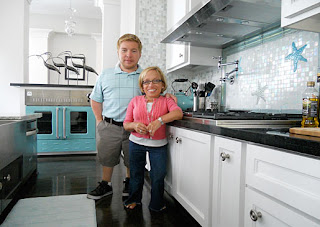 THE LITTLE COUPLE - Have I ever talked about this show before? I don't think so. I randomly picked it up a few years ago and have been joyfully following the adventures of little people couple Jen and Bill. This season has been fraught with tension over the delays on their new home build - which they FINALLY moved into last season - but you wouldn't know it with their consistently upbeat, take-charge attitude.
Quarter-Season Grade: A- 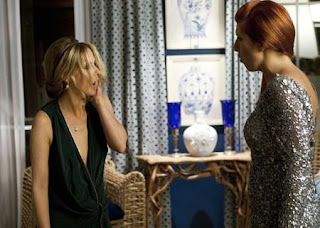 RINGER - Amusingly, Go Fug Yourself has been recapping this show. Primarily in terms of the fashion, but in general as well. SMG herself wrote in and explained the show would lighten up and have better fashion in the coming episodes. So good. Cause it's still taking itself way too seriously, and I definitely enjoyed the actors that play Henry and Agent Machatta better in Life Unexpected and Lost respectively (ditto on Buffy for SMG). BUT the show has an amazing way of pulling out some pretty twisty turny jaw-dropping endings each episode. Colour me excited to watch this unlikely tale continue to spin its wild web of lies.
Quarter-Season Grade: B+ 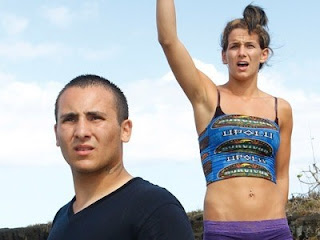 SURVIVOR SOUTH PACIFIC - The producers must have done a happy dance when producing this last week's episode. The number of variables going into the merge are delightfully evil - although I suspect that next week, despite Jeff teasing the contestants, will be the merge given the previews focused only on events that would happen BEFORE the merge. Anyway this has been a pretty choice season so far. We've got loose cannon Brandon on Coach's surprisingly successful and cohesive tribe against Ozzy's martyr-risk by heading to Redemption Island in a last-ditch effort to eliminate hardscrabble fighter Christine from coming back into the game and potentially (although mystifying as to why) joining her old tribe. Beyond that we have scheming Jim, nerdy underdog Cochran, and potential silent assassins in Sophie and Albert. Let the hijinks begin as we roll into the second half of the game, which at this point, really is anyone's game.
Quarter-Season Grade: A 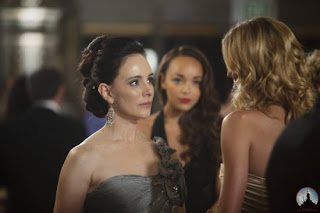 REVENGE - This show is just so...delicious. I mean, salacious would be a more grammatically appropriate choice, but whatever. Madeline Stowe as Victoria Grayson is pretty much the best thing ever, and the OTT writing and constant stream of events is like a darker version of Gossip Girl. It's also fun to root for, yet also be constantly afraid of / for miss Emily Thorne (Emily Van Camp). Bonus points for smarmy nerd boy Nolan providing a bit of comic relief, and even though I want to kick him in the teeth, Tyler (Ashton Holmes) is providing a good, surprising, mysterious villain in this whole twisted mess. My theory: he actually doesn't have any money, and HE may be the one to kill Daniel by summer's end. My question? Why Victoria keeps on hiring Ashley as an event planner if her events all go awry! My fear: that this show will run out of tricks in its bag after the rollercoaster ride that is Season 1, a la Desperate Housewives and Pretty Little Liars.
Quarter-Season Grade: A 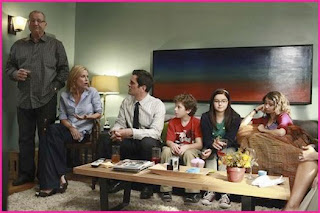 MODERN FAMILY - No matter whether this show makes an effort to grow its characters or not, at the end of the day I appreciate that they can still, consistently, make me laugh.
Quarter-Season Grade: A 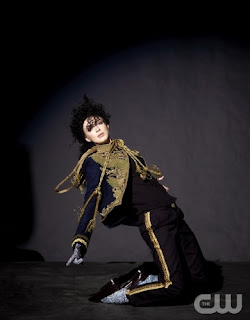 ANTM ALL STARS - This is such a weird season. While it's refreshing to not have girls fretting over their lack of 'skillz', it's bizarre to see them have meltdowns and cause drama when they've all presumably aged a bit and seen how the show will edit them if they have emotional moments. While episode-to-episode eliminations haven't been that exciting (if anything, they seem more arbitrary than ever), the overall guessing game of what the heck makes someone an All Star IS. My early picks: sweetie Laura, fan fave Allison, or dark horse Dominique. I adore Laura and Allison (although curiously both haven't been front and centre much), but in the grand tradition of All Star seasons of any show, I suspect Dom - who was barely memorable from her season - might sneak in for the win. She's had a good showing so far.
Quarter-Season Grade: B 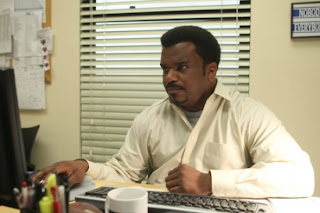 THE OFFICE - My own boss and I had a talk about the Office the other day. Andy Bernard isn't doing it for him, and he's not really selling it for me. In short, the show is floundering. End it. Please.
Quarter-Season Grade: C 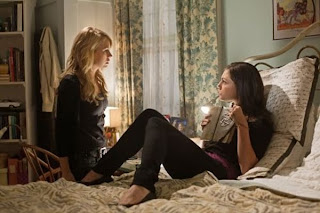 THE SECRET CIRCLE - What's disappointing to me here is I was actually sold on TSC before Ringer. But as of right now, this show is perilously close to being deleted off my DVR altogether. My main issue? I legitimately do not care about a single person or action happening on the show. That's bad. I know Kevin Williamson has been doing his best at laying on the drama - break-ups! secrets! historical secrets! witch hunters! Grandma super witch! star-crossed lovers! dead 'main' character! double-crossing! murder! But it's all just...too much? I just see myself not being engaged with this show for the long-term. And seeing as how I've picked up potentially a few more series this fall, if I had to do away with an hour, I'd get rid of this one. I'm watching the Halloween episode this weekend and making my final do-or-die call.
Quarter-Season Grade: C- 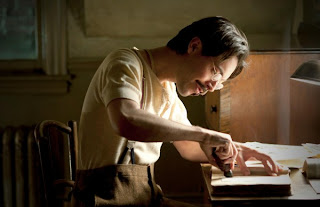 BOARDWALK EMPIRE - this show is still surprisingly funny, and it has provided at least one emotional or plot-based punch every week, but it is still a little on the slow side. I often find myself asking...okay where are we going here? Take for example, Richard Harrow's trip to the woods to conceivably end his life this past episode, that sort of looped back to his reluctant return home. I'm just not sure what the long-term arc is for so many of the characters and plotlines. Although I am loving Margaret, as per usual, and I'm curious to see where Nucky's new Irish footman is going to take them. Altogether I'm just rooting for Nucky...and terrified of Eli.
Quarter-Season Grade: B+ 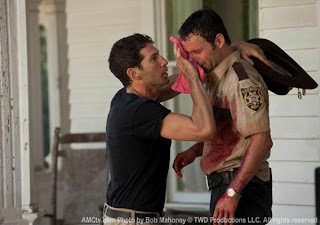 THE WALKING DEAD - There've been some complaints of things slowing down here as well, and I don't disagree. The first two episodes have felt very fixated on a single event, when I'm anxious for the troop to well, keep trouping along. Still, some high-stakes drama between Carl's shooting, Shane's high school zombie nightmare, and the disappearance of Sophia. I said in the first episode that realistically, the kids would have to go, as per Lost having to get rid of Walt. The show's timeline is very, very short and these kids will grow very, very fast. It's hard to hide that. But I'm still so jazzed and scared every time I watch the show so I'm content. For now.
Quarter-Season Grade: A- 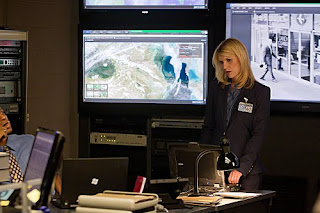 HOMELAND - What an interesting, dynamic little show this is. With relatively few sets, they've made this a very wholly realized, frightening, fraught little world filled with interesting characters. I'm ESPECIALLY intrigued by the end of this last episode, with Carrie and Brodie finally speaking on casual terms. What the hell is that going to lead to? An affair? Deep, deep cover spying? It was just a bizarre, surprising ending - amidst many other puzzling plotlines and questions I had. LOVE!
Quarter-Season Grade: A 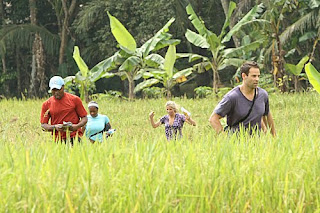 THE AMAZING RACE - Generally speaking, it's been an interesting season...even though we've been stuck in one location for a few episodes, there's still been travel drama. I'm cheering for the snowboarders all the way!
Quarter-Season Grade: A- 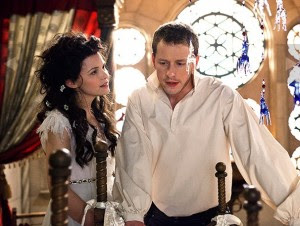 ONCE UPON A TIME - I watched the premiere, mostly because the post-premiere buzz was so strong. General thoughts? I wish modern-day Ginnifer Goodwin wore her hair differently. Everything felt a little forced and OTT. But the premise is neat, and fun, and different from what else is happening on TV. Another show where I wonder what'll happen once these characters 'awaken' - also I'm baffled as to how no one has noticed that no one ages, unless the town is 'invisible' to the public - but I'm willing to give it a four-episode order before making up my mind.