12:16 PM Posted In America's Next Top Model , Gossip Girl , Life Unexpected , One Tree Hill , Parenthood , Saturday Night Live , Survivor , Television , The Amazing Race , The Office Edit This 0 Comments »
We’re in the home stretch for a bunch of shows at this point, with the last few episodes burning off in the weeks before Christmas. Here’s my mid-season (or ‘end of season’ report card for each show):

Gossip Girl – the show has proven itself outside of the trappings of attending ‘school’, which limited them in the first two seasons, but it still suffers from way too much ‘lightswitch flipping’ where the character’s relationships – friends or otherwise – are way too on again, off again. The big storylines of the season are kind of flops: Juliet feels way too old and the show will never takedown Serena, Dan the baby daddy was a short-lived catastrophe (PS: we need more Dan!), and the fact that costars Blake Lively and Penn Badgley have broken up in real-life makes the show a little bit…well, par for the course.
Grade: B-

Life Unexpected – I’ve quite enjoyed this season, despite it still not quite living up to its potential. Bringing Tash in as a less bedraggled version of her S1 self was wise, although the addition of Ryan’s sister Paige has really done nothing for his character or the show. Exploring Ryan & Cate’s bigger relationship issues is important, but I didn’t like the random Julia storyline. I didn’t love the ‘Minnesota’ storyline, although the tangled mess its made and the introduction of Sam (of Degrassi fame) seems promising. Also major props for bringing in Emma Caulfield, who I can never disassociate as Anya from Buffy, but she makes a surprisingly sweet and interesting match for Baze. Theory: Emma (it’s her name on the show) mentioned early on she had a four-year relationship with a married man. I guessed immediately her hesitation towards Baze was the fact it was with his father, and his dad’s bizarre reactions during the Thanksgiving episode make me thing this is the unsurprising bombshell the creators are going to drop sooner rather than later. But I like Emma! And Sam! Come on guys!
Grade: B+

One Tree Hill – Oh god why do I still watch this show? I used to joke with my sister about how terrible the first two seasons were, then I accepted OTH into my life when it peaked from Seasons 3 to 5 (debatably parts of 6 were decent) as a slower-paced character study. Now? It’s just terrible. I find myself often fast-forwarding the scenes with Quinn and Clay (although the latter is hot) because I can’t stand them and their random interjection into the series’ regulars. I also find that the chemistry the original leads has it lacking – they’ve built little worlds around each of the main characters for them to live in, but I miss seeing them together. The rare scenes between Haley and Brooke or Nathan and Mouth are among the best. Also it seems at least one storyline per episode is totally effing pointless – see: the treasure hunt with Quinn & Jamie last season, or the bucket list for Brooke this past week. This show just feels like it has completely lost the plot, and the only reason I’ve had to justify watching it for seasons 7 and 8 was to ‘see how it ends’. So OTH – END IT.
Grade: D

Parenthood – Probably my favourite scripted show at the moment. The interesting thing about Parenthood is that, like OTH, it doesn’t really have an ‘end game’ in mind, but yet it works so much better. The events of the show follow relatively realistic timelines and in many cases, there are no easy answers or hasty resolutions to the storylines (ex: Max’s aspergers, Camille and Zeke’s marital strain). The show is still a little sprawling for its own good – we need more Mae Whitman! – but in general I get really excited when I see this on my PVR.
Grade: A-

America’s Next Top Model – An interesting season in that Tyra’s guest stars and challenges and prizes much more reflected the never-ending theme of ‘high end’. The build-up of Ann kind of sort of made sense, and I’m glad they saw it through, but I’m sceptical about her real-world adaptability (i.e. will she be able to stomach rejection? Will she be able to do commercial work?). Overall a positive direction for the show to go in, here’s hoping they keep it up.
Grade: B+

Survivor – I know a lot of people are kind of at odds with this season. In some ways the cast has been pretty unlikable – there’s no ‘heroes’ in this bunch to root for like JT of Tocantins – but they’ve also been pretty memorable. Jimmy Johnson, Jimmy T, NaOnka, Marty, Alina, Brenda – all of them have been more notable players than many others eliminated before the final three. I haven’t minded this season, but it’s not one of their strongest – the game changers were eliminated early on (to be fair, in game-changing moves) and with the big quitfest this past week, it kind of sucks that happened. I’d have loved for Jimmy J to have stayed on longer. Overall I’m curious to see how this season ends though – everyone left is NOT who I would have picked in the beginning to go all the way.
Grade: B

The Office – The show has really lost its footing in the last few years, feeling increasingly gimmicky and contained versus long-term storylines, whether they be office-related (like the multiple season implosion of Dunder Mifflin) or character-related (hello romantic storylines). There have been some laughs this season, but overall its kind of par for the course of the latter Office seasons.
Grade: B

Saturday Night Live - Oh woe is me at how bad this show has gotten. The writing is terrible, the sketches wayyyy too-oft repeated, and the reliance on Kristen Wiig painful. I have no words, other than to say, Lorne Michaels, give me a call if you want something good to happen with your show. I'm at the point now where I analyze every sketch to say "That wasn't funny. That was terrible. What were they thinking?" versus actually just enjoying it and laughing.
Grade: D-

The Amazing Race – There’s no way an all-female team won’t win at this point. At least that’s my theory. Although fact, despite the fact they keep on winking at the fact one of the final three teams could MAKE HISTORY re: all females, lest we forget during the All Stars season two of the final teams there were females-only as well, and the Franken-team of Danielle and Eric nabbed the win. This season has been kind of lacklustre, as the format gets tired – I’m hoping the rumours about another All Star edition or a celebrity edition are true, as I’d love to see them shake things up a bit. I felt like Brook and Claire were shoved down our throats as the rah rah team to cheerlead for (double sidenote: no team that has used the U-Turn has ever won the show to my knowledge, so in theory, B&C are going to win), while the doctors, while admirable, are kind of boring. I’m not asking for buckets of drama, but a little more enthusiasm and a lot less restraint would make this team easier to root for. Jill and Thomas are just your typical cute, cocky, young couple that tends to excel on this show. I kind of like them, but I’m also rooting for an all female team to win – it sucks that an otherwise likable (if unmemorable team) is kind of being cast as the villains this season. In fact, the belief that I have that this will happen is the main thing that elevates this season’s grade.
Grade: B

All My Movies: Anchorman 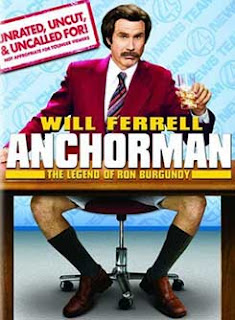 Road To Ownership: I'm pretty sure this movie made its way into my collection via my boyfriend. 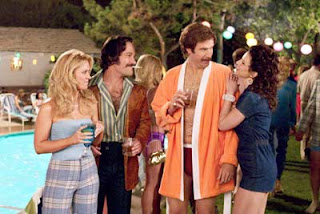 The Plot: It's the 1970s and Ron Burgandy is the top rated evening news anchor in San Diego. However, his supersize ego appears to meet its match when an ambitious female reporter named Veronica Corningstone joins the team. The twosome quickly fall for one another, leading to a kinder, gentler, Ron, but all of that falls apart when a chance encounter gives Veronica the big break she needs - resulting in her promotion to co-anchor with Ron, and demotion to ex-girlfriend of Ron's. Sabotage and rage are the name of the game after that basically. 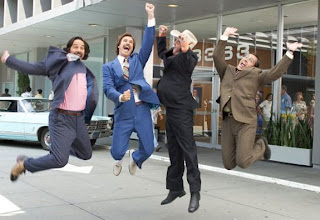 The Good & The Bad: Well, this is basically a Will Ferrell for you. A quintessential one in fact. The movie is centered around a egocentric character, with everyone else essentially there as set pieces for gags. The plot is generally pretty spastic, consisting mostly of sketches and random dude moments, while the ending is laughably bad. Basically it's like Ferrell and his crew sat in a room and thought, what is the most retarded story we could possibly come up with and still convince people to not only buy tickets for it, but watch it again and again (for the record, I've only seen this movie as often as I have because of watching it with other people).

That being said, Ron Burgandy is one of Ferrell's more memorable, and marginally more successful characters, partially because it's one of his first big starring roles. Many of his other characters - such as in Semi-Pro and Talladega Nights - are basically riffs on the same thing: let's take an amusing job, cast an egocentric dolthead, and cobble together a ridiculous story (note: although Old School follows the same 'sketch' format, Ferrell is not the star, therefore it's also acceptable). Much like the first 'Pie' film, the replication of this formula wears thin after awhile, and even then stretches of this movie pass where you know they've thought they're doing something funny, but they aren't. 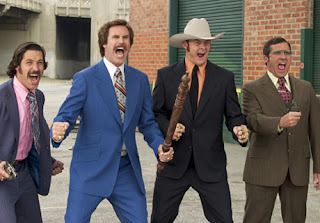 Best Scene: Although it's TOTALLY ridiculous and inserted just for a random bunch of cameos, the alleyway news team gang fight is my favourite part. Mostly because seeing Ben Stiller as a laughably bad 'Spanish Language News beetches!' anchor is amazing.

Worst Scene: The ending is pretty damn terrible. Like, really terrible. And the animated 'unicorn ride' is pretty ghey as well.

Best Character: By default I'd have to go with Will Ferrell. While some of the minor scene stealers in other Ferrell films take the cake, this movie is all Ron, all the time. Honorable mention goes to Christina Applegate for managing to inject rigid Veronica with some laughable humor and girl power empathy.

Worst Character: I don't find David Koechner funny, ever. Not on The Office, not in this movie, not in any movie. The fact he makes me laugh 0.0 times in this movie earns him the low honour of being the worst character.

Soundtrack of our Lives: some classic 70s tunes are spun throughout, but the Semi-Pro soundtrack is about 10000000x better.

If You Like This You'll Like: Basically any Ferrell movie - Old School, Elf, Semi-Pro, Blades of Glory, Talladega Nights, etc.