All My Movies: American Pie 2 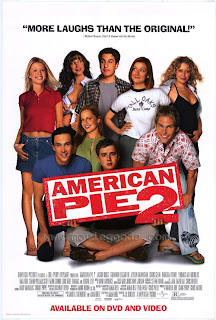 Road To Ownership: I specifically remember this as being one of the movies I purchased from Blockbuster when I had mono in high school. 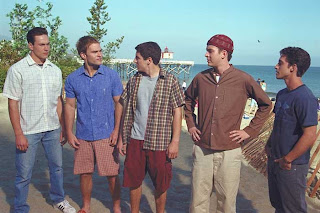 The Plot: We meet up with the fab four fellows that starred in the first Pie film, after their first year of college is complete. The boys may be older, but when it comes to love and sex, and they're generally no more wiser than when we last met them. Eternal planner Kevin decides the boys are in need of some good quality bonding, and rents a cabin on the lake for the summer (on the advice of his brother). From here, each guy once again undergoes his own sexual journey, although Jim takes even more of a front and central focus than in the past, along with specific gambits designed to involve multiple cast members and memorable scenes over advancing the plot. Jim is struggling to figure out what makes a good lover, Oz is dealing with time apart from Heather, Kevin is coping with unresolved feelings for Vicki, and Stifler and Finch are still at odds over Stifler's mom. 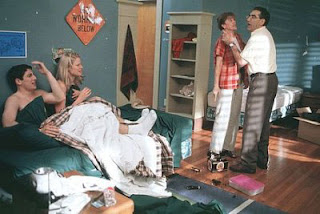 The Good & The Bad: I used to say I liked AP2 better than AP1, but I'm not so sure that's true. On one hand, the polish of AP2, and the lazy hazy days of summer feel make it somewhat more appealing than the first film. On the flip side, it feels like many of the gags are set up just to top the hilarity of the first film - the lesbian scene and the superglue scene as cases in point. Although to the film's credit, they aren't entirely just rehashing the main elements of the first film - other than a sly nod to apple pie in the opening scene, and the early party scene, there aren't too many crossover elements.

That being said, I think the first film is stronger because the concept is more fresh, and more importantly, the four leads are treated as just that - leads. When you look at the next (and final) big screen entry into the series, American Wedding, you'll see there is a reason why they eliminated the characters of Oz, Heather, Natasha, Vicki, etc. In this film virtually everyone but Jim and Michelle feels a bit forced at one point or another. Even the three mains are basically there to fulfill either watered down sidestories (Oz and Heather's time apart stands out as one of the movie's biggest weak points, other than Stifler interrupting their phone sex) or propping up the stunt scenes. The trend is continued with American Wedding, wherein Jim and Michelle basically have ALL of the storylines - a shame because the original film was a treat with the 'will they wont they?' element.

That's not to say there aren't a bunch of laughs and enjoyment to be had with this film. In general, I would say I enjoy them equally but I recognize the original film is better. There are so many classic moments in the second movie, as well as a genuine bit of growth for the characters that continues on into the final incarnation with Jim and Michelle's wedding. On that note, the movie does a good job of putting together a slapstick couple and allowing you to still feel some empathy for them, resulting in a surprisingly sweet ending, with a twist dating back to the beginning of the film. 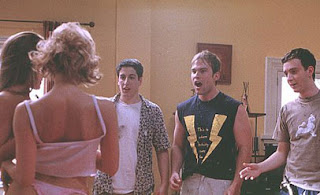 Best Scene: As I said with AP1, the most memorable scenes of the first two films are both the funniest, but also the most...gratuitous to put it lightly. In a vague tip to Nadia and Jim's bedroom / webcam encounter, the second film features the 'lesbian' scene, wherein Stifler, Finch, and Jim get caught by the two women whose house they're painting. Stifler calls them out as potential lesbians and what follows is a game of tit for tat, although the true hilarity of the scene isn't what's actually happening in the room with the girls, but the reactions of Kevin, Oz, and the dozens of people who happen to be tuned into the same radio frequency. The boy's reactions are pretty choice in the room as well, I suppose.

Worst Scene: When I was watching the movie, I recall thinking of a scene and going 'Yeah that's it!' but now that I reflect back, I'm having a harder time deciding. I will say the worst plotlines are Vicki and Kevin's confusing friendship (and how it disappears for 3/4 of the film only to resurface momentarily at the end) and Heather and Oz's pointless long-distance dating. I also get the serious heebie jeebies from the end of the trumpeting scene. 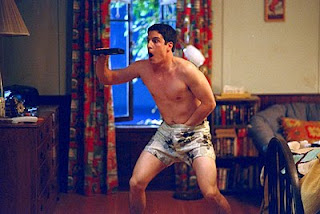 Best Character: my hat goes off to Jason Biggs again in this one, for his hilarious physical comedy and dedication to making Jim as much as a fool as possible while still managing to make him a tiny bit cocky and fairly endearing.

Worst Character: Despite their storyline being my fave in the first film, Heather and Oz are really pointless in this movie. Vicki and her man meat date at the end are equally annoying, as is the whole 'And Vicki got HOT' (read: thin and braless) plot point.

Soundtrack Of Our Lives: Once again, another fantastic soundtrack, representing some of the great millenial pop punk bands including Blink, Sum 41, Three Doors Down, and Michelle Branch.

If You Like This You'll Like: Obviously American Pie and American Wedding, although I can't recommend any of the straight-to-dvd releases. This film is a slightly jarring mix between crazy hijinks and a more focused love storyline, which means some of the other movies I recommended last time might not be as appealing. Something like Wedding Crashers, The Hangover, or Eurotrip - all regarding friendship among men, as this film examines - are great picks.