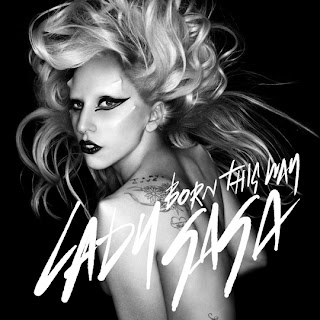 I'm just going to say it. I don't like Lady Gaga's new album Born This Way. I've been listening to it all day and I'm sadly disappointed.

The writing was on the wall I suppose. Like the rest of the world, I found the lead single and title track a Madonna rip-off circa 'Express Yourself'. And when I stumbled across 'Judas' a few weeks ago, I felt like it was a weaker, weirder version of 'Bad Romance'.

I've always maintained that I like Gaga the musician, not Gaga the exhibitionist - and these days she definitely seems to be skewing towards the latter. I'm just kind of over her glazed-over "You like me?" persona. Gaga is trying so hard to represent all of us, all the so-called freaks in the world, that I've completely lost who she is - a talented, interesting musician.

Aside from my issues with the enterprise that is Lady Gaga, let's talk about what we're supposed to talk about when we talk about a musician - THE MUSIC. Unfortunately, it's all a little forgettable...and melding together. The songs have a consistent thrumming, Euro-Dance feeling to them that doesn't feel fresh or cutting edge, but rather reminiscent of Britney Spears' latest effort Femme Fatale minus the desire to throw elbows at the club.

It's also the lyrics...almost every song refers to Gaga's past insecurity and accepting yourself and inner beauty. Or alternatively, oddly, religion - including the quite blatant call-outs to 'Capital H-I-M' in 'Born This Way' and the title of 'Judas'. Also there's tons of love for Gaga's gay icon status - many of the songs give shoutouts to sexuality and romance. Do I support the message? Absolutely. Does it feel a little pandering? Definitely.

To Gaga's credit, she sells this sh*t for all she can. It's a bold artist that can convince the world to embrace an album that is equal parts derivative and oddly show tune-y. I just don't feel like it has that spark of...being genuine. Or for that matter, unique - every single from her first album (actually every track) had a slightly different vibe, and that's what made it so awesome. I can't say the same is true here.

I'm sure the world will embrace it, although the love for her first two singles has been more tepid than I think anyone anticipated. I don't want to see her have a ton of backlash, but I really did expect more from the Lady herself. I just feel like she's succumbed to her own image.