All My Movies: American Idol - Search for a Superstar 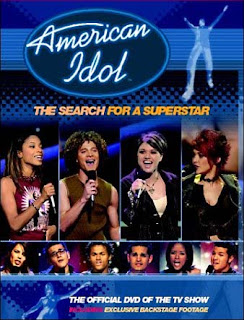 Road To Ownership: Let me explain! Do you remember what a BIG DEAL Idol was in its first, and in particular, second seasons? It was the biggest sensation in town, hot on the heels of another summer reality sensation, Survivor. I was in high school at the time and received this DVD as a Christmas gift in a Secret Santa exchange.

The Plot: The bulk of the DVD is about an hour long, give or take, and basically gives you a rushed overview of the first season of American Idol. You get some glimpses of the auditions - including Kelly Clarkson's and a handful of the worst ones out there - snippets of the top 30 round, a week-by-week recap of the theme, eliminated contestants, and usually one or two of the top performances, and then at the finale you get to hear Justin Guarini sing 'A Moment Like This', plus Kelly's emotional rendition after winning (which is subsequently butchered by Nikki McKibbin or whatever her name was). There's also a few other features that mash together cast interviews, behind-the-scenes clips, and moments from the show.

The Good & The Bad: You know in retrospect, it would have been cool had Idol put this DVD together properly. They *rush* over all of the weeks so quickly, and include not one, but TWO Nikki performances, plus some of Justin and Kelly's worst performances (in the penultimate episode). It would have been nifty had they featured every contestant at least once, as well as at least three or four songs from Kelly - also, why no love for the 'Big Band' week, which in my opinion had some pretty great moments? Bah!

Er, anyway. Although there is some fun nostalgia with watching this DVD - a pre-groomed Kelly! A tiny set where security hazards (crazed fans) exist! Pre-crazy Paula! Brian Dunkelman? - it's ultimately a pretty disappointing recap of the first, great, socially phenomenal season of American Idol. Awhile back they reaired the season with commentary from the contestants and judges and it was way more interesting (when I caught a glimpse anyway) than this thing, although it made for entertainment while ironing when I watched it, I guess.

I just wish they'd done more performances, less recaps / talking. Like, did you need to include each competitor's goodbye video? That's one of the WORST filler-worthy parts of the show? Having every group number (and not just the majority) would have been nice as well, cause at the end of the day, seeing the singing is all I want to see! Plus it would have been nice to include some of the judges' more memorable critiques / reactions - like after Kelly's 'Natural Woman' performance. God I'm getting impassioned over this.

Best Scene: Kelly Clarkson singing 'Natural Woman' or her winning performance of 'A Moment Like This'. So ironic when you consider how vehemently she broke things off with the Idol crew after the series. But for reals, the latter was a pretty iconic pop culture moment in the 00's.

Worst Scene: Justin's performance in the penultimate show. Really producers, of all the performances, you included this one? I would have much rather seen "Get Here", which is what he was *known* for.

Worst Character: Brian Dunkelman. You got fired for a reason bro, and it's your fake tears after the gang's performance of 'That's What Friends Are For'.

If You Like This You'll Like: Apparently there are other idol DVDs out there, plus I'm sure a good chunk of the show's breakouts have concert DVDs to their names.