2:01 PM Posted In Abby Elliot , Kristen Wiig , Saturday Night Live , Television , Vanessa Bayer Edit This 0 Comments »
You may have noticed in my recap of new fall premieres, I failed to talk about Saturday Night Live. The thing is, I wanted to wait to let the newbies have a bit of time to stretch their legs before I talked about it. We're still only two episodes in and I'm still hesitant to jump on one side of the fence or the other, but after doing more work on my self-imposed music project and noticing the one of the newbies' first starring sketch had earned a spot on the YouTube home page, I felt the need to speak up.

Here's a question that once upon a time had a very easy answer when it came to Saturday Night Live: what makes for a good episode, season, or 'era' of the show? Is it the cast or the writing? At one point, it would have been a no brainer to answer the writing, for you can have a comedic genius on your show (as a regular or a guest) and completely waste them if the writers' don't sharpen their pencils to a fine comedic point. SNL always had a reputation of hiring good talent, the cream of the crop more often than not, so any shortcomings often fell on the writers, and not the infinitely talented cast. 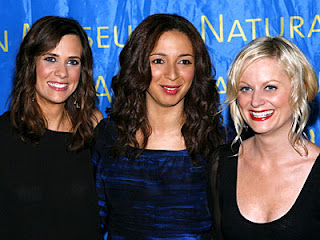 Nowadays however, it seems bland and blander are continually dragging the show down in terms of both cast AND writing. The main problem of the current era, as I've stated in the past, is the men are generally interchangeable and forgettable, right down to their names. The breakout stars of the male-dominated cast have been the ones who have a little something extra - like Andy Samberg and his digital shorts or Fred Armisen's chameleon-like getups (although to Bill Hader's credit he does play a good movie scene stealer, it's just too bad most people don't know his name). On the flip side, this was okay for awhile because we had some really solid female leads in the form of Amy Poehler, Maya Rudolph, and Kristen Wiig. 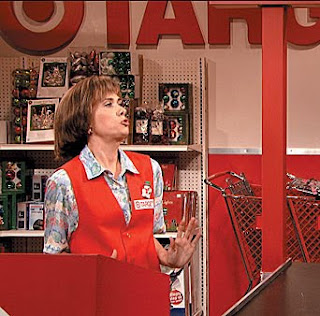 Now that Wiig is on her own however, the talent seems dangerously unbalanced. Wiig is ridiculously overused, and often thrown into sketches as the centrepiece in variations on a similar theme (which often have to do more with her making faces for the camera rather than throwing out clever deliveries of amusing lines). Wiig is a greatly expressive actress, fantastic at embodying different characters, but more often than not they just make her into a really OTT performer because the writers are too damn lazy to write some great dialogue. Consider that the majority of her most famous characters are well known for the words and inflections they use - Penelope, Judy the travel guide, and the Target Lady - versus the ridiculous facial expressions of the likes of Gilly.

We've gone through several ladies over the years designed to accompany Wiig as the female cast dropped out to make babies and career moves. Casey Wilson was unceremoniously turfed after two unimpressive seasons as a featured performer. Jenny Slate's amusing doorbell bit didn't save her f-bomb-laden reputation after one season. Abby Elliot was mysteriously upgraded to full cast member status this season despite having ZERO characters to her name (other than a half-baked, irrelevant Angelina Jolie impression), and still failing to do anything of note in the first two episoides. Naveen Andrews made it through her first season, which is fine by me as I thought she showed the most promise of last year's new gals. And finally we now have new meat in the form of Vanessa Bayer.

VB is the one who had the aforementioned YouTube clip, a segment of her hosting a talk show to replace Amy Poehler's hilarious 'Dakota Fanning Show, the similarly titled 'Miley Cyrus Show'. Poehler's take was hilarious because she portrayed Dakota Fanning as anything but a bubblegum blonde, regularly sending barbs in the direction of her piano playing sidekick and outsmarting the majority of her guests. In contrast, Bayer's Miley impression was a lot more dead on with who Miley actually seems to be - a slightly obnoxious loudmouth with a really, really grating way of speaking. There were all of two funny moments in the sketch: when she claimed she was also seeking out darker roles like Johnny Depp, and the clip of the movie she was in with Andy Samberg, but other than that, a good impression does not a hilarious sketch make. Yet SNL is shoving it down the throats of the masses as this week's buzzed about moment...

Which no doubt means they'll trot it out a million and one times. I don't know what's up with the writers these days, but it seems once they hit on a formula that maybe sorta kinda works, they drive-it-home. How many times did we see 'What Up With That' last season (and have already seen it once this one)? Or the same troop of unfunny bits - Keenan's alien sports co-host, the 'Scared Straight' segments (that are only remotely funny cause the boys always look like they're going to laugh), or the oft-repeated 'Fred Armisen takes over a talk show and can't help'? Egads, I'm getting frustrated just looking at this.

Typically speaking, I enjoy seeing a few old favourites return, but for the most part the show has failed to produce any memorable characters other than the ones Wiig has produced. While I get jazzed for the occasional appearance of one of her characters, the writing has dropped of considerably, and the fact she's so overused makes me less interested to see much more of her than I already do. Some of the best sketches in recent memory have been the ones that are standalone pieces (like last year's hilarious 'Single Ladies' bit), or the first time you encounter something like 'What Up With That'. At the very least, writers, make a radical variation on the theme to surprise us and make us laugh. Let Lindsay Buckingham sing instead of Keenan!

As for the other cast members, so far the other two white dudes have seamlessly blended into the cast of forgettable faces, and I don't mean that in a nice way. I'm happy the show has added some more diversity in the form of another African-American male, but much like Bayer's Miley impression, just because he does a 80% job of Will Smith, doesn't mean he's going to be super funny. The show is just in such a terrible place right now, with flagging talent on the main cast and a lack of creativity to let the featured performers (and ahem, Abby Elliot) step up to the plate and do something worth talking about that is actually FUNNY.

Finally, to conclude my SNL rant I'm going to repeat what everyone in the blogosphere seems to be repeating: what the hell is up with the lack of host inclusions? Aside from Abby Elliot, they get less lines and interaction than anyone else they're featured in a sketch with. There's an old rule in advertising that if you run out of ideas, you should go back and look in the archives to see what worked with the best sketches - and hosts - ever. I'm not saying rip a sketch off from the 1970s, but I am saying pay attention to what makes something funny or unfunny, because right now the writers seem to have no clue with what to do with the majority of their hosts. Jon Hamm and Justin Timberlake are two of the best hosts in recent memory, but even their more recent episodes were flagging compared to just a couple of short years ago (which begs the question - who all has been shuffled out of the writing department lately?), and I'm sure the multiple-time hosts like Alec Baldwin and Steve Martin have noticed it as well. One of the best episodes in the current era I can think of is the hilarious Christopher Walken episode. And you want to know why peeps? Because it picked up on so many elements of his character (including the awesome 'Walken Family Reunion') and what it would be funny to see him do - not, where can we stuff this celeb into a main cast member set piece?

I see the challenges SNL is currently grappling with, but the formula they're messing with is so old, I'm just wondering why they're so adamant at destroying their legacy with such terrible casting, writing, and use of hosts over the last few years.