All My Movies: American Pie The Plot: Four middle of the road high school guys make a pact to lose their virginity by the time they graduate - namely, at prom. Each guy plays a certain archetype and has their own storyline to overcome: Jim, the socially awkward, sexually naive one who's parents really just don't understand. Kevin, the cocky ringleader with a long-term girlfriend that can't bring himself to say he loves her to get her in the sack. Oz (Chris), the popular jock who lays it on thick while trying to be sensitive, until he realizes he can't have it both ways. And Finch, the astute, debonair high schooler that sips macchiatos, studies latin, and has a thing for older women.

The Good & The Bad: This is one of the movies of us millenials' generation, plain and simple. Although the brand has been severely watered down with the straight to video releases (similar to the 80s 'Meatballs', or National Lampoon's for that matter), the original trio of films - particularly this first one - still holds its own as the birth of the dude comedy, chockful of dirty jokes, rampant sexual hormones, and a killer late 90s soundtrack. Sure it's crude and mildly insulting to women, but at the end of the day, Pie is great fun, and still makes me laugh no matter how many times I watch it - often at different jokes every time.

Watching it this time around I did pick up on some implausibility in the plot I never really noticed before. Namely, that the entire action of the film takes place over three weeks. It seems like a LOT happens, particularly with Finch's rise and fall, Kevin patching things up with Vicki, and of course, Oz's relationship with Heather. That being said, let that detail go (and all the other little tweaky bits throughout) and you've got a pretty hilarious film with a relatively basic plot - will they or won't they? - that makes for a solid hour or two of entertainment.

One thing I like about the Pie series is that despite how much of it is played for laughs, these guys, and many of the encounters / relationship scenarios they're put in, FULLY EXIST. Say what you want about the films, they often posit the worst parts of awkward humanity and make you cringe and giggle at the same time (which actually, is the downfall of the last of the original films, American Wedding, which goes for camp more than crass way too often). Add to the fact the four main guys have great chemistry and fulfill their awkward harmonious balanced group of friends perfectly, plus some great support from the various archetypal females, and you've got a relatively solid roster of acting performances from a bunch of film virgins (hah). 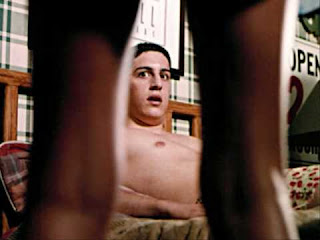 Best Scene: The two most famous scenes from the first two Pie films (aside from the aforementioned 'pie' incident) mix some of my favourite bits with my least favourite - namely, Jim and Nadia's 'study session' and the painting crew's lesbian encounter in the second film. They are the ones most blatantly filled with gratuitous sex, but they are also the ones with some of the most memorable, hilarious moments of the film. The reactions to Jim's dance are five times funnier than the actual act, even moreso when you groan, laugh, and slap your thigh in tandem with the characters on the screen. There are many great moments, but this one is the best! 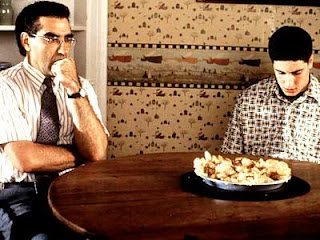 Best Character: I thought long and hard about this while watching. By definition, Oz was the heartthrob of the film and his storyline is still the most appealing to a gal years later (although admittedly I found new 'depth' of all things in Kevin and Vicki's plot this time around)...but really, this award obviously goes to Jim. Jason Biggs, as a newbie to the acting circuit, really gave it his all and was willing to do anything and everything to make us laugh. The thing I appreciate is he wasn't just funny doing pratfalls and sex stunts, he had plenty of humour in the guys' everyday dialogue. Here's hoping a good project comes his way soon.

Worst Character: Nadia. Aside from Shannon Elizabeth's terrible accent, this is the one character that is NEVER funny. Tara Reid, Alyson Hannigan, and Mena Suvari all have playful, humorous moments...Nadia is just a patsy in the boy's horndog game, and when you really stop to think about it, oh my god how horrible is the video incident for her?

Soundtrack of Our Lives: Classic 90s tunes. From Veruca Salt and Harvey Danger to the be all and end all of 90s tunes - Semi-Charmed Kind of Life, you've got a killer power punk soundtrack here. Worth a listen!

If You Like This You'll Like: Obviously the next two pie films, American Pie 2 and American Wedding. Also the slew of dude horndog comedies that came out after it. Van Wilder, Tomcats, Road Trip, Eurotrip, etc. Also some of the more recent dude comedies that have a bit more bite to their screenwriting - Wedding Crashers, 40-Year-Old Virgin, and the like. It's like the guys from American Pie have grown up and are still just obsessed with sex.