6:43 AM Posted In America's Next Top Model , awards shows , Emmys , Fall 2011 , Parenthood , Ringer , Survivor , The Secret Circle , Up All Night Edit This 0 Comments »
I've got a rule around these parts when it comes to jelly-vision watching. Basically, my aim is to watch three episodes of a show (if I can stand it) and make my decision as to whether to continue after that point. After reading EW's Fall TV Preview, a few more shows have made the cut in the last week. Only after my three-episode rule will I have the guts to turf or set up a series recording for anything that isn't part of my regularly scheduled programming. 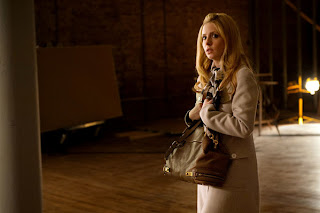 Ringer
Talk about a premiere trying to do too much...with a more experienced showrunner, the premiere probably would have been a little less ambitious (and would have had way better special FX for the damn boat scene). BUT, it definitely sparked intrigue. I do hope the show learns to gain a sense of humour at some point - right now it's all serious, all the time, which doesn't lend itself well to SMG's considerable talents, along with castmate Kristoffer Polaha.
Survey Says: I stuck with 'Dollhouse' the whole way through out of Buffy nostalgia (granted Joss Whedon was at the helm). I'm giving Ringer three episodes to *keep* me hooked as I'm not sure how this concept will work in the long, long-term. 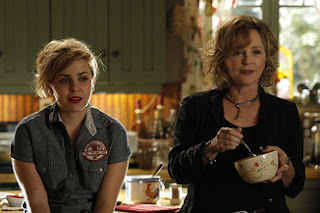 Parenthood
A solid season premiere, although the last three minutes were cut off cause of stupid America's Got Talent, so I never saw Adam's final decision. I assume he's opening the studio with Crosby though. I'm a tad confused by Kristina's working situation, and irritated by Hattie / Alex in the premiere, but I loved the 'FNL' joke they slipped in. Altogether a promising start to another year with the Braverman clan.
Survey Says: Obviously I'm going to continue watching. I love this show. Plus...Jason Ritter! 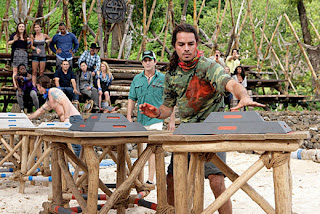 Survivor: South Pacific
Interesting season premiere...Ozzy and Coach coming back are SO different than Rob and Russell. I think there are some potentially great characters among this cast, and again, Ozzy and Coach can be considered liabilities more than Russell or Rob ever was, so I'll be curious to see how this plays out for them. I predict neither one will make the finals, but one of them may make the final episode.
Survey Says: The tribe has spoken, of course I'm watching! 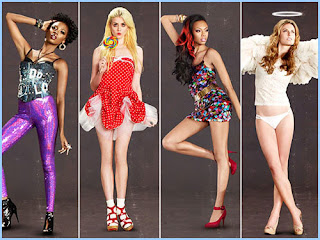 ANTM All Stars
*Pulls face* The season premiere did nothing to dissuade me that an all-star edition of the show was a BAD idea. Why? Well for one, these girls supposedly have careers to fall back on. Top Model works best when it rewards girls who surprise or grow with the competition. We know what these girls are capable of, and if anything, getting eliminated early on in the show may be a bigger hindrance than help to their careers. The whole thing just felt LOUD and overdone and unnecessary...everything felt like it was on warp speed. I actually like the way the characters unfurl on the show normally. I'm not sure how this one'll go...but I'll watch.
Survey Says: I'm the stalwart amongst my friends that still watches this show. I'm not about to quit now. 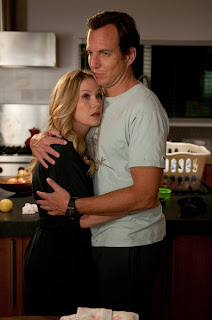 Up All Night
Surprise! This is one show that sneaked its way into my fall TV preview, after the big glowing article in Entertainment Weekly. I went into it with an open mind - I'm not exactly the target demographic. My main thoughts? Will Arnett is 90% of the reason why I'd watch this show. Christina Applegate's 'smart girl in a world of insane people' one-liners fell kind of flat without character development, and Maya Rudolph's talk-show host was something we've (quite literally) seen before, but still funny. The baby was cute!! I just wonder what kind of legs this show has with only three lead characters...
Survey Says: I'm test-driving three new comedies this Fall - 'Two Broke Girls' and 'New Girl' premiere this week. I'm only willing to take on one, maybe two, new ones...and at this point, I don't know that 'Up All Night' will cut it. An admirable debut though. 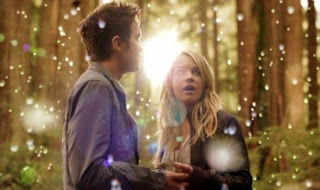 The Secret Circle
How pretty is this photo? Stunning scene from the pilot episode of CW / Kevin Williamson's new paranormal drama, 'The Secret Circle'. Generally speaking, I liked it. There was a decent amount of intrigue (if slightly overdone in the way Williamson is known for) and Britt Robertson is great. The only way this show will become a casualty at this point - because I see its potential - is if I simply feel overwhelmed with other, more mature programming.
Survey Says: A show with legs beyond the initial 'what happened to the last circle?' conceit. I'm definitely willing to go past the first episode. 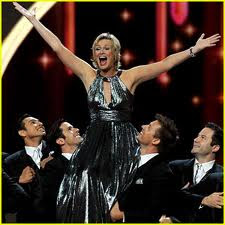 Emmys 2011
Yeah this was a one-off, but it bears some notice:
- Why must every awards show do a musical opening? Kind of boring. Jane Lynch was an okay host, but sometimes her quips felt a little off-colour (like her attack on Tom Cruise. So five years ago). I LOVED her segment on the Mad Men set though.

- I was SO happy with some of the surprise wins. Julie Bowen seemed floored, and I was totally cheering for Ty Burrell (my fave Modern Family member) to take it as well. Melissa McCarthy ascending from 'character actor' to 'best lead actress' was precious. Margo Martindale, who I primarily know as 'Ninah' on 'The Riches' seemed just tickled. And MOST IMPORTANTLY - Kyle Chandler, the beating heart of Friday Night Lights 'Clear Eyes, Full Hearts, Can't Lose' was finally recognized for his amazing, soul-stirring turn as Coach Taylor. If I didn't talk about the finale before, it's because I watched it on DVD instead of live, week-by-week. It was amazing. I was so happy for Jason Katims to walk away with the writing award, and would have been content with that. But for them to also recognize KC was brilliant. He was so humble and sweet.

- Some great acceptance speeches this year. Ty Burrell, and the Modern Family writer / creators, stand out in particular. I barely fast-forwarded through the speeches.

- Kate Winslet now has an EGO. Not an 'ego', but she's just a 'T' away from the legendary acting quad-fecta of EGOT (Emmy, Grammy, Oscar, Tony). Kudos Kate.

- Fashion. Lots of red, which I'm so bored with. I appreciated the pops of colour and there were a few truly stunning choices on the Red Carpet this year. No major disasters.

- Does anyone remember when the Housewives were the talk of the carpet? Oh how the mighty have fallen - not a single Wisteria Lane appearance this year.

- Overall I was fine with the telecast. I would have liked to see Steve Carrell and Connie Britton win their categories, but generally speaking I thought the Emmy voters did a solid, well-rounded job of awarding a very talented bunch of pretty people. Kudos.