Good Luck To The Grads!

8:00 AM Posted In Degrassi , Degrassi The Next Generation , Television Edit This 0 Comments »

Last night was the finale of the second summer o' Degrassi, and our final glimpse of this year's grade 12 class. Although...I recall hearing from Stephen Stohn (one of the show's creators) / Kary's Degrassi Blog that there was still a 'one-hour special' that will air this fall as sort of a send-off to these characters, similar to how we said goodbye to Jane, Spinner, Manny, Emma, and Jay a year ago with the New York movie. I certainly hope that's true, because it felt like these last few episodes were about highlighting the future grade 12's as opposed to saying goodbye to the current cast.

In terms of a review of the overall half-season, I think the show did one thing way better than last year, and one thing I have mixed feelings about. The way better comes from the way they integrated characters into secondary plots. It's something the original series did really well ("Hey, there's Yik and Tessa talking in the hallway!") but the current incarnation has always struggled with - you generally only saw characters when it was 'their week' (or episode, as it were). By bringing in the characters / having them create atmosphere, it allowed us to further their character development and remind us of how they fit in within the school. Great example? Jenna's one-liner at Marisol and Katie's presidential debate, regarding Marisol and KC's affair. Great reminder of one of the season's best plots, and how it didn't just end with their break-up.

In terms of the not-so-great? I have mixed feelings about the direction the show is moving in - to long-term plotlines. Degrassi is a short and sweet little show that in the past, gave you half an hour to 'get' a story, and sometimes left things unresolved. Now they're doing more long-form plots - to the point where every character this summer had one, if slightly meandering, plot line. This means if you don't like someone's plot, they're pretty much a write-off for the season. Also Degrassi has such a huge cast, it felt like the pushes forward in each character's plot were sometimes totally out of nowhere / you'd kind of forgotten, etc. etc. Not that the original format didn't suffer from weird plot inconsistencies. Degrassi is just a really weird show for that I guess. The main reason why this has cropped up in my mind is reading the Degrassi Blog this summer, I noted that each person really had one, and only one story, other than minor involvement in secondary plots. It never felt like that before, and I'm not sure what to make of it...it made for a slightly slower summer, admittedly. 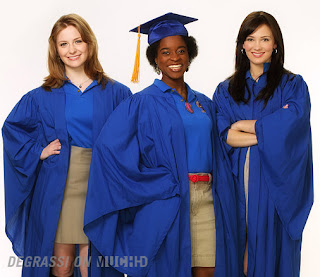 Anyway! Back to the grads. This batch has a special place in my heart because they are the last of the 'crossover' characters that interacted with the original cast members, having arrived in season 7 with the Lakehurst / Degrassi merger. Except Chante, who has been on the show since what...season 5? 6? and probably should have graduated a year or two ago. Anyway. I really liked these kids, and I felt like they did a good job of growing them and giving them interesting plotlines all around.

Everyone knows by this point that I think Holly J (Charlotte Arnold) is all kinds of awesome. I don't know that she loves being 'famous' all that much, and I've heard she's off taking journalism at Ryerson, so I'm skeptical that she'll go the Hollywood route, despite being a fantastic actress and probably my most to-be-missed characters on the show. I loved her original 'Mean Girl' role when she first joined the cast, but I also appreciated that she grew up and became an ambitious, mature, respectable character.

Chante (Jajube Mandeila)? Well, she never had a major plotline, like, ever. She had a b-plot that one time, getting Principal Snake to listen to the students...and I half-expected her to lead an end-of-season revolution to BRING BACK REGULAR CLOTHES! But kudos to Degrassi for sticking to their guns, because really, the uniforms only came into play 'half a school year' ago. There's no way they'd scrap them that easy. Anyway, I don't have much to say about Chante. Really. I don't.

As for Anya, I generally liked Samantha Munro's portrayal of a ditzy, clueless, but sweet, lost girl. They finally made her grow up and get interesting in the last couple of months, and it's sad that her development ends here - but again, thumbs up to the writers for giving her a little rebellious streak that made sense with all of her plotlines. I actually enjoyed the Ownya (Owen & Anya) relationship as well. He is a 'type' of guy I think every girl knows, and they made their 'haters gonna hate' relationship work well. It'd be neat if next season they did a 'long-distance relationship' thing with the two of them, because they haven't really to this point. Neater still if something terrible happened to Anya. Not in a sadistic way, mind you, but in a "how much does this relationship mean?" way. 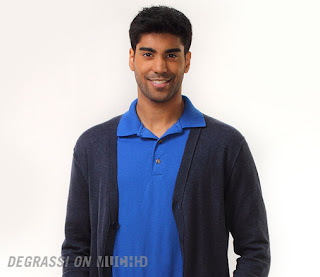 Sav (Raymond Ablack) kind of fizzled out, mostly because his primary castmates graduated the previous year, and he had no real friends in his grade. So they hinged the bulk of his storyline on Holly J until their inevitable break-up, and then he disappeared, only to reappear for Ally's runaway plot and his bizarre, awkward romance with Mrs. Oh. The addition of Moe gave him a friend in the final episodes, and made him interesting again imo - Sav works well with other actors - but otherwise kind of an unmemorable character post-Studz. I hope he makes an appearance here and there given Ally's still kicking around. 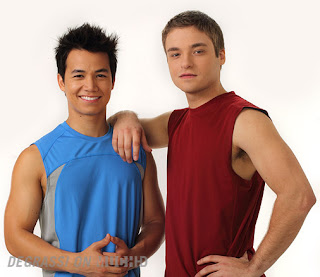 Riley / Zane. Well, Zane's not part of the Lakehurst crew, but I LOVE him just the same. I seriously hope Shannon Kook-Chung goes to Hollywood as I find him mesmerizing on-screen. Unfortunately the two of these characters were buried in gay-land tales, instead of getting to participate in other, non-sexuality related plotlines, so their departure (especially since their surprising break-up) isn't that sad to me, other than I'll miss the rare occasions they let Zane appear in an episode. I wish them well as they ride into the Brokeback Mountain sunset at 'Eastern U'.

As for next season? We've got some new niners. When I think back to S8 (cited by many as one of the worst evarrr), aka the last time we had new grade 9's, I do cringe at the immaturity of some of the plotlines - like Connor and KC fighting over a pre-makeover Clare. I hope the producers learned their lesson and can come up with a way to make us fall in love with these kids the way we have with those former grade 9's, who are now about to join grade 11. When they graduate? Man that'll be tragic. The new crop of grade 12's are actually ALL new characters that joined in the last year, so I'm not quite as attached to them (Eli!). But the grade 11 class, at this rate, by the time they graduate we'll have been with them for about 5 years of television time. So maybe that'll be the time to hang up the Degrassi hat and say farewell to the show? Doubtful, as they're masters at introducing new characters and continuing on the awesomeness, but we'll see.